This year's tournament will include the following improvements based on player evaluations:

Sanctioned Tier-4 USAPA Tournament
Dry-fit tournament shirts to all first place winners (Of course all players will receive t-shirts)
Ability levels from 2.5-3.0, 3.5-4.0 and 4.5-5.0
USAPA Pre-Certified Officials (A first for any tournament in the USA)!!!!
All Proceeds benefiting the "Strongdogs" - Men's USA Wheelchair Basketball Team!
Sponsorship by Hillsborough County "Friends of the County Parks"
Round Robin Games to 11 points!!! (which means you'll play at least 4-6 teams)!!!
Metals & Awards 1st-3rd place in each division

Attached is our Flier and Registration form.  If you have any questions simply email me back!

Posted by DDonald at 7:54 PM No comments:

*Depending on amount of sign-ups and agreement by all participants, format may be changed to “Open”.

To sign up, please visit the front desk at the New Port Richey Recreation and Aquatic Center or call 727-841-4560

Posted by DDonald at 7:52 PM No comments:

Stay Out of the Kitchen!

One of the ambassadors up in the Jacksonville Beach area posted this in their recent PickleGram that she sends to the local players.  I thought it was a good write up and wated to share with our players.


A clip from a Pickleball website in regards to the Kitchen:

“Recently watching a match where a player, (the world famous Jim Hackenberg) 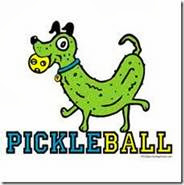 while returning one of those aggravating net-nippers, literally went into the kitchen and laid down during a point.

His opponent, Josh Grubbs, then tried to hit a dink shot into the kitchen, intending to land it on the now-prone Hackenberg. However, the dink landed successfully in the kitchen, but missed Jim. Jim calmly sat up, while still in the kitchen, and hit the ball back over the net for a winner.

The bottom line is, you can start a point in the kitchen if you want. It's your kitchen. Use it whenever you like. Yes, you can go into the kitchen any time you want and stay as long as you like. Just don't hit a ball out of the air while you are in there.

And remember, when you leave the kitchen, both feet must be on the ground outside the kitchen before you can hit a ball out of the air”.
Posted by DDonald at 2:44 PM 3 comments:

Hi to all Pickleball Players ,

Tournament information and registration sheets will be available on the USAPA website, the Atlantic South Region website,  and on www.pickleballspecialties.com after May 1, 2013.  We are working on a couple of more tournaments that will be announced as soon as the details are all set.

Registration forms, flyers, and on-line registration will be available after May 15  for the June, August and September tournaments.  Check back often for additional tournament forms.

We look forward to seeing all of you!!

Our very own Meadow Pointe Player, was recently appointed as the USAPA Ambassador for Wesley Chapel, Fl.   The following appears on the USAPA Atlantic South Region Ambassador Profile page................  He joins more than 50 other ambassador who represent the State of Florida. 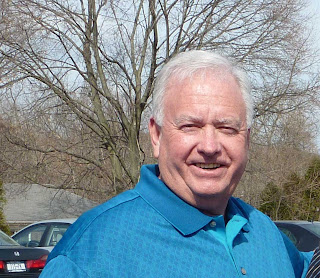 Don was born in Brooklyn, New York and af  ter living most of his life in Carmel, New York, was transferred to the Tampa Bay area in 1990 by AT&T along with his wife Linda. He is a graduate of Nova Southeastern University and is now actively engaged in his second career, this time as a Broker Associate selling residential real estate throughout the Tampa Bay area. Don was introduced to Pickleball by our current Regional Ambassador Donna Donald and her husband Rich (ambassador, Florida Heartland) back in the winter of 2007 and fell in love with the game. He continues to help organize a group in Wesley Chapel that plays in the Meadow Pointe (MP) community. He has encouraged new players in the surrounding community and taken part in demonstrations at local schools and neighboring communities helping them get their groups started. He plays 3 nights a week with his group in MP and wishes he had the time to play more. He hopes to take a few of the MP players with him to the upcoming tournament in New Port Richey, FL and then to Temple Terrace, FL to help introuduce pickleball at another new pickleball facility in Tampa Bay.

Congratulations, Don!
Posted by DDonald at 12:49 PM No comments:

MP Players on the Road


On Saturday, January 12th, eight of our local players from Meadow Pointe (MP) took part in the Warm Up to the Geezer Meister tournament doubles competition in New Port Richey

Congratulations to our winners! Karen Hinnen and Marilyn Howell - First Place in the Ladies Doubles, 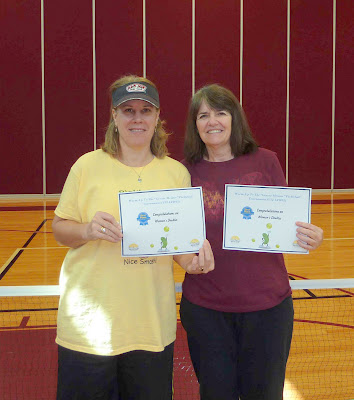 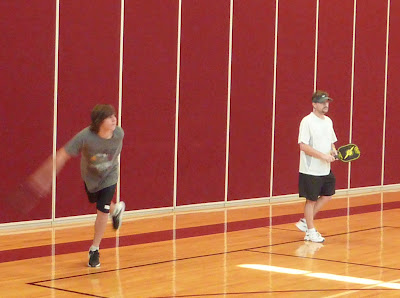 Tom Saxton and Ernesto Diaz - Second Place the Men's under 55 - 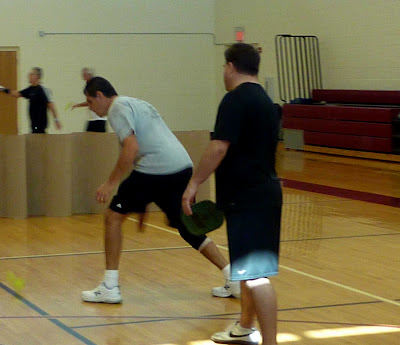 ....... and on Sunday four of us competed in the mixed doubles.
Karen Hinnen and Zach Hinnen won 2nd Place in the under 55 category.

Below is a group photo! 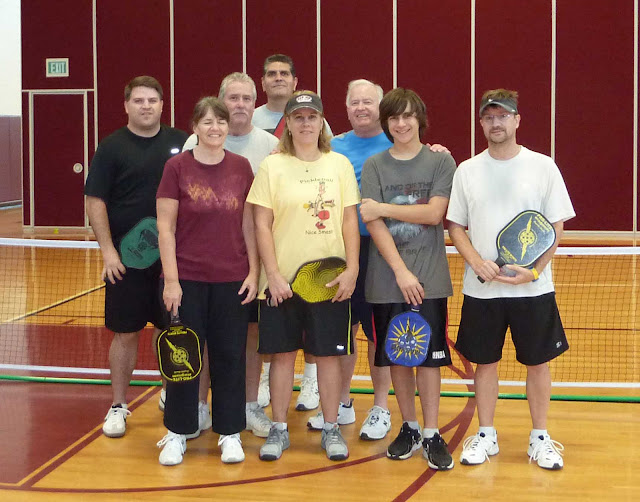 Special thanks to our MP volunteers  that joined me :Renee Glassman, John Hutton and Suzi and Pat Zwolenki. The turnout was light as seen in the photo, but several more ladies attended later in the two hour session.  While it was not very well organized by the  Recreation Center, our  hope is that a few of the employees at the Recreation Complex learn to play the game, in order to be available to guide anyone new coming to learn to play in the future. 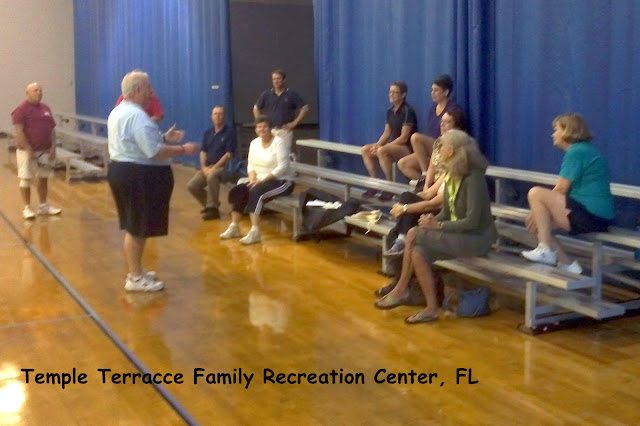 Posted by DDonald at 9:43 AM No comments:

It was a fun night at MP II tonight and we had a pretty good group of 12-14 out to play. 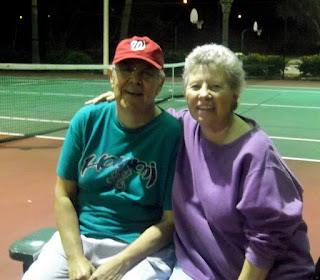 Two new MP Picklers!  Dave and Sharon stopped by one day last week to see what the game was all about.  Not surprising that they were back this week - MP players always make newbies feel welcome.

But tonight they were serious - they were taking notes on where to get their own paddles!!


Rich(back row far right) and I (Donna - front row-3rd from righ)  came to play with the group tonight.  We sold our home here  in Meadow Pointe - so we had to have a final "group" picture! 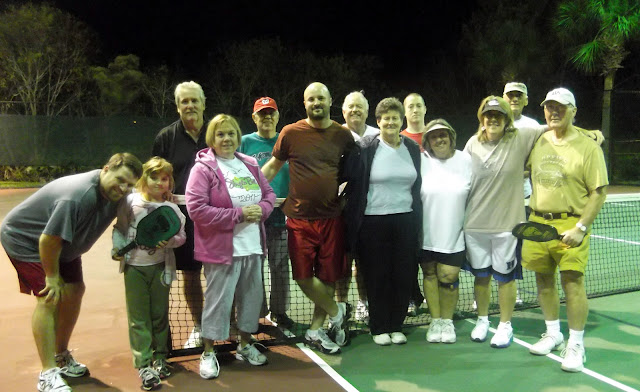 And frequently on Friday night the group goes out for Pizza. Some go to Marco's and others to Pizza Mania.   Tonight nine of us selected Pizza Mania. Food was great!   Seated below from left to right is Linda and Don, Mark and Renee, Gary, and newbies Sharon and David. 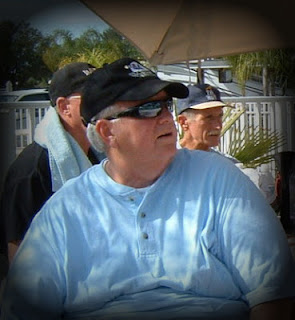 MP Picklers have helped some of the neighboring communities introduce pickleball and most recently the students at the John Long Middle School thanks to MP player, Donald Bass.   The following is from Don:
During the week of November 12th the John Long Middle School (JLMS) will be having the Great American Teach-In.
Recently, I did a brief demo for one of Ms. Como (PE Teacher at JLMS) PE classes and it was well received.   She had about 9 nets set up, and paddles and balls for the students, so all of the students got to try it.  Ms. Como was very pleased with the student's participation……. .so she considered this demo to be a success.
She would like for a group of us to come one day during the Great American Teach-In week. If we can, we will be reaching out to about 500 students if we are there all day.
In order to volunteer for this event each of us will have to do a short online application for security purposes. Once completed, we could volunteer at any Pasco County school.   Ms. Como envisions us doing a brief demo in the gym and then going out to the courts to help students try the game with each of her classes that day.
These are all children from our community, so our time will be well spent.
Posted by DDonald at 8:20 AM No comments:

Hey Meadow Pointe Picklers
Don't miss this great event this year.
Pickleball for all ages and ALL Skill Levels.
Information Below
Hope to see you there!

Posted by DDonald at 6:00 PM No comments:

Larry Neely is holding a pickleball clinic to introduce pickleball to players in the Tampa area.  It is being held at the Cheval Community in Land O Lakes.  If any of you are able to help with the demo, please let Larry now.  His contact information is below.

PICKLEBALL
WHAT IS PICKLEBALL YOU ASK? 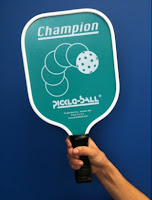 Pickleball is a combination of tennis, badminton, and ping pong and it’s one of the fastest growing sports in America. It may be a silly name, but it’s a serious sport. It’s fast paced and easy to learn, great exercise and lots of fun. Good for all ages …. Come see what the excitement is about! 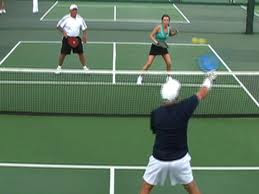 Free instruction: come learn from current players of the game. We have all the equipment you need. Just bring yourself.

Posted by DDonald at 5:54 PM No comments:

Meadow Point Pickleball players meet every Monday, Wednesday and Friday evenings at 6:30 PM. and rotate between the MP I and MP II Courts. Contact Don at donald.bass@verizon.net or Renne at rglassman@tampabay.rr.com to find out what courts we are playing on this week!!!

Come Join the Fun -- Caution!!! Pickleball can be Addictive!

JOIN THE BIGGEST PICKLEBALL COMMUNITY IN THE COUNTRY

Some of the Crew After Playing 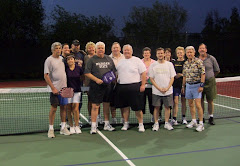 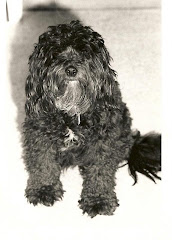 THE DOG THIS GAME WAS NAMED AFTER.

CHECK OUT OTHER PICKLEBALL CLUBS IN THE REGION 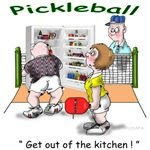 Every person involved in pickleball as a participant, official, volunteer, representative of the USAPA or spectator pledges as follows:


I will not engage in unsportsmanlike conduct or encourage others to do so.

I will not engage in any behavior that would
endanger the health, safety or well being of others.

I will not engage inthe use of profanity.

I will treat others with respect.

I will exhibit fairness and honesty in my dealings with others.

I will not flaunt my position.

I will not use USAPA records or materials for personal gain.

I will observe the Golden Rule of doing unto others as I would have them do unto me.

The above Code applies in all situations that relate directly or indirectly to pickleball play.